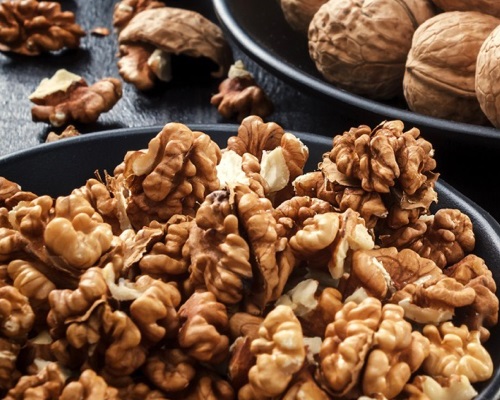 This is according to researchers from the University of California, Davis, who found that walnuts, aside from helping to reduce excess cholesterol and increasing insulin sensitivity, are also capable of reducing the levels of a protein associated with prostate cancer.

According to nutritionist Paul Davis, who acted as the study’s lead researcher, their findings provide additional evidence that walnuts, despite being high in fats, are actually a great addition to a healthy diet.

As detailed in their study, Davis’ team fed mice — all of which were genetically predisposed to develop prostate cancer — with whole walnuts or walnut oil for 18 weeks. Compared with those that ate the same diet but without walnuts, the walnut-fed mice developed much smaller and slower-growing prostate tumors. The researchers also found that the walnut-rich diet helped reduce prostate cancer growth by 30 to 40 percent.

This, Davis and his team noted, could be linked to the lower levels of insulin-like growth factor (IGF-1), a protein strongly associated with prostate cancer, that they observed in the walnut-fed mice.

Compounds in walnuts affect the expression of prostate cancer-related genes.

Aside from determining the effects of a walnut-rich diet on prostate tumor growth, the researchers’ experiment on mice was also designed to identify which components of walnuts are responsible for their anti-tumor properties. Walnuts are known to be rich in essential nutrients, such as zinc, magnesium and selenium. They are also an excellent source of fiber and essential fats like omega-3 fatty acids, which are known for their heart and brain benefits, among others.

To find out if these healthy components, particularly omega-3s, contribute to walnuts’ anti-tumor effects, the researchers used soybean oil as a control. Soybean oil has a similar fatty acid profile to walnuts. The researchers found that while walnuts and walnut oil reduced cholesterol and slowed prostate cancer growth in mice, soybean oil did not. This confirmed their suspicion that other walnut components or a combination of these nutrients are responsible for the improvements, not just omega-3s. (Related: Go nuts with the cancer-protective properties of walnuts.)

On the other hand, the researchers found that walnuts can influence the expression of genes involved in tumor growth and metabolism. “The energy effects from decreasing IGF-1 seem to muck up the works so the cancer can’t grow as fast as it normally would,” Davis explained. “Also, reducing cholesterol means cancer cells may not get enough of it to allow these cells to grow quickly.”

Besides the expression of IGF-1, Davis and his team discovered that some components of walnuts also affected the activities of proteins like adiponectin, the tumor suppressor PSP94 and COX-2, all of which are markers for reduced prostate cancer risk. However, they were not able to pinpoint which compounds in walnuts were involved in slowing prostate cancer growth.

A similar study conducted by researchers at the University of Texas Health Science Center at San Antonio arrived at the same conclusion, with the researchers noting that eating a modest amount of walnuts can help protect men against prostate cancer. These findings are especially important, given the fact that prostate cancer affects one in six American men, making it the most common cancer among men.

According to experts, environmental factors such as diet play an important role in the development of prostate cancer. While it is true that nuts are great foods to add to a healthy diet, they differ in the nutrients and plant compounds that they provide. Walnuts, for instance, contain ellagitannins, melatonin and gamma-tocopherol, all of which are known for their ability to reduce oxidative stress, inflammation and the expression of genes linked to chronic illnesses like cancer.