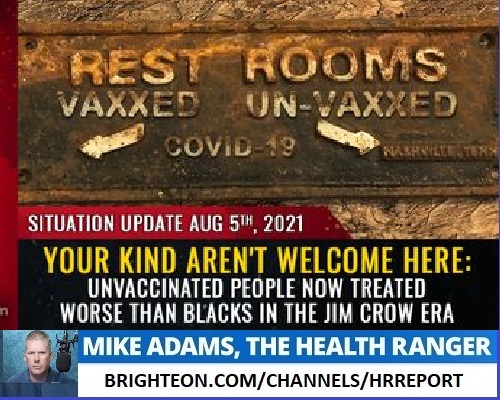 It is morally wrong to dehumanize and disrespect people because of the color of their skin, or for being gay, or for being physically disabled, and so on. In America, we build access ramps so that people in wheelchairs can have access to restaurants and public buildings. But now, thanks to the bigoted, racist, anti-freedom vaccine zealots, Black people who refuse to take part in the government’s vaccine medical experiment will be told, “You people aren’t welcome here.”

The appropriate question is: What do you mean, YOU PEOPLE?

In New York City, Mayor de Blasio has just announced that restaurants, gymnasiums and soon grocery stores and public buildings will discriminate against the unvaccinated like a scene ripped right out of the Jim Crow era of racism and bigotry. The pharma-funded media is openly calling for unvaccinated people to be “shamed” and “shunned,” actually encouraging vaccinated people to dehumanize others who refuse to take the deadly jabs that are now linked to at least 20,595 deaths and 1.9 million injuries across the USA and the EU.

To see how insane this government-sanctioned discrimination really is, just take the recent announcement by de Blasio and replace “vaccinated” with “White” and “unvaccinated” with “Black,” and it turns out like this:

Bill de Blasio: If you’re White, you’ll have the key, you can open the door. But if you’re Black, unfortunately, you won’t be able to participate in most things. That’s the point we’re trying to get across, it’s time people see Whiteness as literally necessary to living a good, and full, and healthy life. It will require Whiteness for workers and customers in indoor dining, in indoor fitness facilities, and indoor entertainment facilities. The ONLY way to patronize these establishments indoors will be if they’re White. The same in terms of work.

Can you imagine the outcry if de Blasio declared that Blacks could not have jobs, or visit restaurants, or go to the gym because of who they were? It would be immediately decried as a policy rooted in hate and racism, and those attempting to carry out such policies would be criminally investigated by the DOJ.

But announce the same discrimination against unvaccinated people, and suddenly all the hate and bigotry is celebrated by the media, the government and Big Tech. Because hatred is endorsed by all those groups when it helps compel people to take Big Pharma’s depopulation shots. Never make the mistake of believing that this vaccine push is rooted in love or even a desire for public health. It’s all rooted in hatred, racism and raw bigotry.

In a nation where it would be abhorrent to deny someone access to a restaurant because they’re gay, trans, Black, female or physically disabled, we now see mayors literally encouraging discrimination based on vaccine status. This makes those government leaders bigots and racist, since Black Americans have the least percentage of vaccinated people (about 26%) versus other races. So the war against the unvaccinated is, not surprisingly, actually a war on Blacks, now being waged by the very same lunatics (like Dr. Leana Wen) who have been running the Planned Parenthood genocidal attack on Black babies for generations.

Many people refusing the vaccines have been previously vaccine-injured, meaning they have a medial disability… so why is it okay to discriminate against the medically disabled?

What’s even more disturbing in all this is the fact that many people have made a conscious choice to avoid vaccines because of previous vaccine injuries or allergic reactions. This means they have a medical disability that prohibits them from taking additional vaccines without risking serious adverse reactions or death. Yet in a society where it’s illegal to discriminate against people with physical disabilities, it’s now being openly encouraged to discriminate against those with medical disabilities.

It’s the equivalent of a restaurant owner in New York City tearing down the wheelchair ramps and posting a sign, “Handicapped not welcome here” … which would be abhorrent (and illegal).

Or imagine if a fitness gym set up shop in New York City and posted a sign, “No lesbians allowed.” They would be burned down by angry lesbians wielding Molotov cocktails, pitchforks and torches.

Yet Mayor de Blasio essentially just told every NYC business to post a sign that says, “Unvaccinated aren’t welcome here,” thereby discriminating against people for who they are.

In a world where the left-wing media repeatedly tells us, “love wins,” when it comes to vaccine obedience, hatred is the real policy of those who currently hold power.

Since all vaccines have expiration dates in vaccine passport apps, any person’s privileged status will end if they don’t continue to comply

Vaccine passports used in New York assign expiration dates to vaccine injections. Your “freedom” expires in one year, based on current vaccines, and with Moderna and Pfizer now pushing “booster” shots, those will likely expire in just a few months. Big Pharma is pushing for monthly spike protein injections, which means vaccine passport apps will have people on a short leash: Keep complying with the monthly bioweapons injections, or you’ll lose your freedom and plunge into the “unvaccinated” status, even if you’ve taken all the vaccines so far.

This means, incredibly, that even those who have taken all the hyped vaccines can very quickly find themselves categorized as “unvaccinated” and watch their “key to the city” privileges vanish.

The lesson in all this? Complying with medical tyranny will never bring you freedom. The only freedom comes from saying NO to the tyranny in the first place.

Learn more in today’s critically important podcast about medical rights, human rights and civil rights in the context of health freedom. For if we don’t protect the freedoms of all people to function in society, then none of us are living in a free society at all.