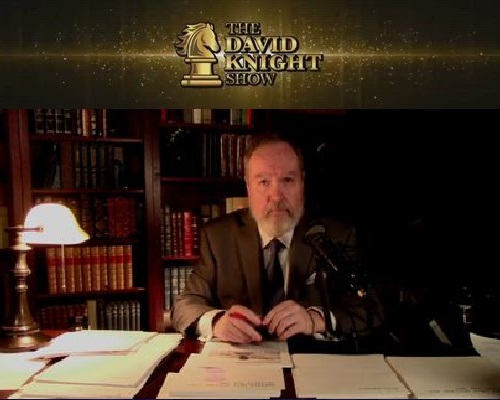 Your Host, David Knight.
Tuesday July 20th’s Edition
My Analysis & Reports of the News.
Bypass censorship by sharing this link.

1:59 Surprised? Media discovers PayPal is financially blacklisting people. Here’s why it’s NOT surprising (beyond the fact that it happened to me months ago). Microsoft, again, at the center of the government conspiracy to control/silence all speech FAR beyond what we’ve seen so far — C2PA
12:26 ADL pushing financial blacklisting & American Jewish Congress demands punishing/cancelling of any one questioning “life saving medical intervention” — as in vaccine mandates and passports. They’ve become the Nazi monsters they fought
21:13 ACLU says the 2nd Amendment is racist. No, Gun Control is SLAVERY. The ACLU’s war on the Bill of Rights and individual liberty and how Reagan & NRA infringed on 2A. Then, cop who executed a man on his hands and knees is free because he “perceived” the unarmed man had a gun. And, gunman in Forth Worth, TX stoned to death after he shoots and kills
49:42 Biden Gets Weird, Even for Biden. “My butts been wiped”. Did he mean to say his brain or Hunter’s laptop has been wiped? But then his promotion for vaccines becomes even stranger
59:31 Why Didn’t Trump Create a Soros or Antifa Investigative Committee? Why doesn’t he speak out or financially help his 500+ followers who are denied due process as part of this inquisition denying due process?
1:04:56 INTERVIEW Eric Peters: Make America V8 Again! From the Dodge Hellcat Red to the Fauci “Jonestown” Cult, Eric Peters, EPautos.com covers liberty & mobility now & in the near future
1:49:00 “Horse punching” mainstream media trick. Worldwide protests (including one in Michigan by health workers) even as they don’t even try anymore to present rigged stats — just “experts”. Listener shares the extreme measures being taken in Munich — underscoring the importance of what’s happening locally
2:05:44 “Experts” in White Lab Coats, “Delta” and other lies. Have you noticed how THE LIE has spawned so many variants? Delta Variant is a complete gaslighting of the public
2:14:16 Biden declares “long Covid” a disability and brags about his connection to Americans with Disabilities Act (ADA) — but his mandates disregard disabled and have created tens of thousands more disabled
2:17:28 It’s not just restaurants and small business that are being crushed — massive shortages in food and soaring costs are coming thanks to broken supply lines that haven’t recovered 500 days later
2:34:33 SCAM: PCR Test Company Throws Swabs Into Trash. Completely fabricated “test results”.