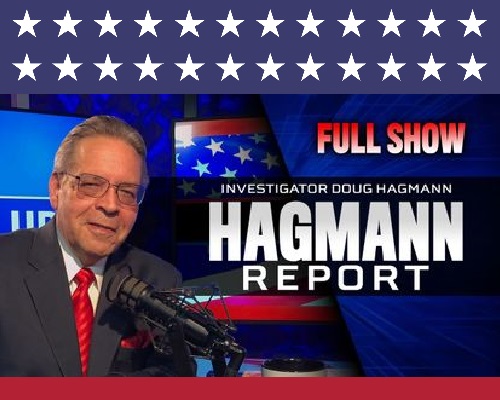 • The Global Communist Takeover is Just the Start, Not the Goal. • Paul McGuire on The Hagmann Report. •

Many analysts, scientists and Bible scholars believe that the convergence of global events such as the pandemic, a potential World War III scenario involving China, a new global economic system that will usher in a cashless society with neural implants, nano-chip particles, satellites and a world brain that the Book of Revelation states will be a mark of the beast system.  The globalist elite and their secret societies are using the pandemic to bring in their New World Order, which is now called the Global Reset.

Paul McGuire, the author of 34 books, a radio talk show host, a Professor of Eschatology (Bible Prophecy,) a science fiction feature film producer, television commentator, the Senior Pastor of Paradise Mountain Church and internationally recognized expert on Bible prophecy reveals the supernatural secret Jesus Christ promised His disciples, which enabled them to evangelize the world and “rock” the Roman Empire.  As Paul explains from decades of researching the Bible and his personal experience, that secret is to be “Clothed with power from on high,” which is the supernatural power of God that enables you to overcome obstacles and accomplish the impossible in your life and in your world.

Paul’s newest book, Power From on High, available at a special discount  for Hagmann Report listeners and viewers HERE (using coupon code Hagmann), takes you on a mind-bending journey that begins at his childhood, raised in an atheistic, humanistic and intellectual household in NYC, where he was taught to hate Christianity and began his search for answers in science, the New Age and radical politics.  Power From on High applies a biblical worldview to understanding things like:

The Signs of the Times

The rise of a Big Brother and Brave New World totalitarian state with mass satellite and electronic surveillance, a scientific dictatorship, scientific mind control, genetic engineering and the creation on non-human DNA in an effort to create an artificial heaven on earth.

Paul McGuire exposes the mystery of Babylon that began in ancient Babylon at the time of the Tower of Babel and how its secrets have been passed on through secret societies that continue today.

Paul, who was demonstrating with the radical activist, Abbie Hoffman, at 15 years old exposes the secret occult plan for America revealed by the pyramid with the all-seeing eye of Lucifer where the words “New World Order” are written.

Paul McGuire’s dual major at the University of Missouri was filmmaking and Altered States of Consciousness, which helped give him the unique perception that enabled him to connect the dots of the “Matrix” and understand how the Bible revealed and predicted genetics, DNA, super-civilizations, spiritual warfare with principalities and powers, synthetic telepathy, remote viewing, interspecies breeding with Fallen Angels producing the Nephilim and the secret Luciferian agenda behind Communism, Marxism and the Illuminati.

Power From on High will reveal mysteries and secrets along with the occult “Plan” for America and the United Nations.  You will learn how to act supernaturally and think supernaturally by understanding the Bible in both a logical, scientific and spiritual way.  Paul McGuire points out that in the final analysis the Word of God is our final authority in all things and that Jesus Christ is the Lord of all of life and not just the spiritual world.

Douglas J. Hagmann has been a licensed investigator in the private sector for the last 30 years. As a private detective, Hagmann has worked well over 5,000 cases and is recognized as a surveillance specialist. He has worked as an informational and operational asset for various federal and state law enforcement agencies.