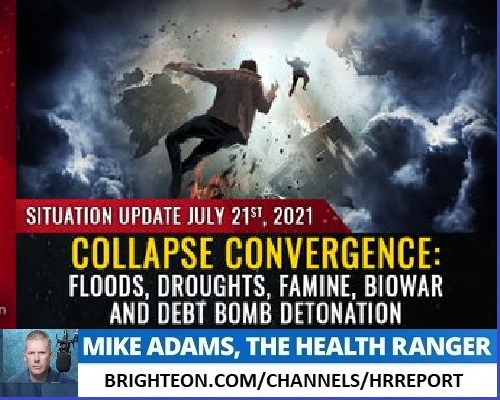 The first thing we all need to recognize is that the catastrophes are being engineered.

The covid bioweapon was created in a lab. The vaccine was developed to intentionally achieve depopulation. The “great reset” of the financial system is being planned by the wealthy bankers. Even the floods, droughts and crop failures are mostly the result of weather weapons.

The second thing we all need to recognize is that they’re “stacking” the catastrophes on top of each other in order to achieve maximum devastation.

While plenty of people can survive one crisis at a time — such as a food shortage or short-term flood — very few people are prepared to survive a multi-layered, engineered cluster of catastrophes that are unleashed on top of each other. The malicious lockdowns have also destroyed much of the financial buffer that the middle class once had, pushing those people ever closer toward destitution. (All by design, of course.)

Despite all this doom and gloom, preparedness makes this survivable. Because prepared humans are hard to kill.

Shockingly, the globalists who are trying to exterminate most of the human race have already come to the realization that most people are really easy for them to kill for the simple reason that most people have zero preparedness. The average human being alive today has almost no spare cash, very little spare food, no fuel, gold, silver or even a means of basic self-defense. It only takes a controlled grid down event for globalists to exterminate perhaps 70% of the U.S. population within a few month. If they add a controlled debt bomb implosion and engineered food scarcity on top of that, they could theoretically achieve 80% or even 90% extermination rates (which seems to be what they want).

I’ve taught prepping and survival principles for two decades now, and I’ve been personally prepping since at least 1995. But now my urgent message for all those who wish to survive is that we need to prepare for simultaneous, engineered collapse events that are timed for maximum destruction. The demonic mass murderers in charge of our planet right now are deliberately trying to eliminate as many human beings as possible, and the depopulation vaccines are just the beginning. Much more will be unleashed against humanity in the months and years ahead.

Get the full story in today’s Situation Update podcast via Brighteon.com, and tomorrow’s podcast will focus on practical prepping steps to help you get ready: