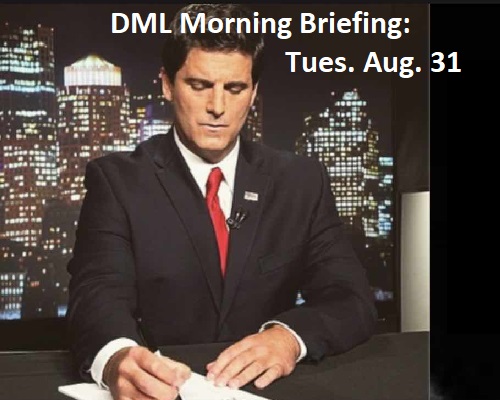 Today is August 31 and I am Dennis Michael Lynch. Below are my opinions on the stories grabbing headlines this morning. I hope you share this briefing as doing so will make you the smartest person in the room, in my opinion.

In a letter to House Armed Services Committee Chairman Adam Smith on Monday, 27 Democrats asked that fiscal 2022 not exceed President Joe Biden’s request of $715 billion for the Department of Defense.

The group, headed by Reps. Mark Pocan of Wisconsin and Barbara Lee of California, pointed to the imminent U.S. withdrawal from Afghanistan and the increased domestic social welfare needs, arguing lawmakers should cut military spending “now more than ever” and dedicate funding to fighting poverty and climate change instead.

DML: Here it comes – more weakening of the military.

“They established a firm perimeter outside of the airfield to prevent people from coming on the airfield during our departure,” McKenzie said of the Taliban Monday. “They did not have direct knowledge of our time of departure, we chose to keep that information very restricted. But they were actually very helpful and useful to us as we closed down operations.”

McKenzie’s comments come as the news broke Monday that the last U.S. forces in Afghanistan had departed the country, officially bringing the 20-year conflict to an end.

The removal of U.S. forces met the Aug. 31 timeline that the Biden administration had agreed to with the Taliban, though the White House did acknowledge Monday that a “small number” of Americans were not able to make it out of the country.

DML: WHAT did he just say??!! When our military starts praising terrorists, you know we’re in trouble.

Hochul, during a news conference on Monday, said one half of the system “experienced an unprecedented system breakdown” that started with a report of a lost feeder at around 8:25 p.m. for a “short period of time” which “resulted in a voltage dip across New York City.” At around the same time, two power plants and generators went offline, according to Hochul, which was “a momentary outrage that did not go to the backup system.”

When officials attempted to “go back to normal,” an “unprecedented surge” occurred that led to the subway losing signalization and its communication abilities between the command center and trains throughout the system, Hochul said.

Hochul said 83 trains were impacted, but the “most concerning” detail was that five were stuck between stations, affecting more than 550 people. The breakdown lasted until 1:30 a.m. eastern time on Monday.

Hochul, in a separate statement on Monday, said the Metropolitan Transportation Authority’s (MTA) review “uncovered a sequence of failures that resulted in some backup systems not providing power as designed last night, including an additional failure to quickly diagnose the underlying cause.”

DML: Who else thinks this system is just ripe for terror?

4 – Las Vegas store requires proof-of-horse photo to deter customers seeking ivermectin for COVID-19
Washington Examiner reports: A store in Las Vegas is requiring any customer who wants to buy ivermectin, a drug primarily intended to treat parasitic worms in animals, to bring a photo with their horse.

Several people are seeking ivermectin this summer to try to treat or prevent COVID-19 despite warnings from health officials, causing V & V Tack and Feed to be sold out of the drug, according to KTNV in Las Vegas .

Store associate Shelly Smith told the outlet demand began to rise months ago, and that’s when she put up a sign warning customers that ivermectin can be dangerous to humans.

Later, she put up a sign demanding a proof-of-horse photo.

“I don’t want people taking ivermectin horse wormer because it’s horse wormer. You need to prove to me that you have a horse in order for me to sell you this product because you should not be taking this product. This is not for humans to take. This is to treat parasites in horses,” Smith said.

DML: Now you have to PROVE you have the animal to buy certain products?!

5 – Judge restores unvaccinated mother’s rights to see son
The Hill reports: Cook County, Ill., Judge James Shapiro has restored Rebecca Firlit’s rights to see her 11-year-old son after previously revoking the privilege until she got vaccinated against the coronavirus.

Shapiro earlier this month gave custody of Firlit’s son to her vaccinated ex-husband. The couple has been divorced for seven years and were previously sharing custody, according to the The Chicago Sun-Times.

On Monday, however, the judge revoked his previous order that barred Firlit from seeing her son, according to the Sun-Times.

“This court hereby VACATES paragraph 3 of its August 11, 2021 order based on the absence of a pleading or hearing on serious endangerment,” Shapiro’s order reportedly said. The court document did not reveal any additional information as to why Shapiro decided to reverse his decision.

Firlit told the Sun-Times on Monday that she is “extremely happy” about the reversal. “I’m extremely happy, I’m going to see my son right now,” she said, adding, “I know that they are going to say that I’m an endangerment to my son. This isn’t over for me.”

Occupy Democrats tweeted in support of the mom being banned from seeing her child until she was vaccinated.

Firlit had explained to the judge that she did not receive the vaccine because of adverse reactions she has had to other vaccines. He then ordered her to be stripped of her parental right to visit her son until she has been vaccinated against COVID-19 – but has now reversed his order.

DML: This is a total outrage! Thank goodness the judge reversed his order!