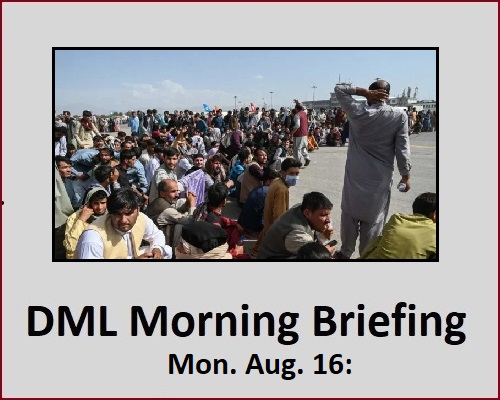 Today is August 16 and I am Dennis Michael Lynch. Below are my opinions on the stories grabbing headlines this morning. I hope you share this briefing as doing so will make you the smartest person in the room, in my opinion. And don’t forget to download the free DML App from the Google Play or Apple App Store to remain connected to me throughout the day.

1 – Multiple people dead at Kabul airport, shocking videos of desperate people clinging to plane
The Hill reports: At least five people have reportedly been killed at the airport in Kabul as thousands seek to flee Afghanistan following the Taliban’s takeover of the country.

Multiple witnesses told Reuters that at least five people at the Kabul airport died, though it is unclear if they had been shot or were killed in a stampede amidst the chaos. Reuters reports that U.S. troops fired shots into the air to prevent people from attempting to force their way onto military flights meant for U.S. diplomats.

Videos posted on social media show hundreds of people attempting to board planes, running on the tarmac and clinging to a U.S. military aircraft as it attempted to take off. Commercial flights through Afghanistan have been cut off, with many airlines announcing that they would be rerouting flights to avoid the country’s airspace.

The U.S. has sent around 6,000 troops to Afghanistan to aid in the evacuation of American embassy workers and Afghans, with the State Department announcing on Sunday that the evacuation of U.S. personnel had been completed.

DML: This is all on you, Joe Biden.  Last night I posted a message on Facebook, it has gone viral. See below:

2 – Biden remains silent on Taliban takeover of Afghanistan, Psaki “out of the office”
Fox News reports: White House press secretary Jen Psaki is taking a break from her duties at the same time as controversy surrounds the silence of President Joe Biden, who is on vacation while the Taliban quickly seizes control of Afghanistan.

Fox News sent questions to Psaki’s White House email address Sunday morning and received an auto-reply. Hours later, on Sunday evening, Fox News attempted once again to reach the White House spokeswoman. The same auto-reply, stating that the voice of the White House would not be available for the next week, was sent.

“I will be out of the office from August 15th-August 22nd,” read the email returned to Fox News. Instead, Psaki’s reply directs the press to reach out to other press officers in her absence.

The timing of Psaki’s time off comes as Biden has faced criticism for remaining on vacation as the Taliban seize control of much of Afghanistan, even moving into the capital city of Kabul and seizing the presidential palace at a pace that has caught the White House off guard.

Biden has remained mostly silent on the issue, a fact not lost on many of the president’s critics.

3 – Haiti hospitals overwhelmed by quake victims as death toll hits 1,297
Reuters reports: PORT-AU-PRINCE, Aug 15 (Reuters) – Haiti’s hospitals were swamped on Sunday by thousands of injured residents after a devastating earthquake the day before killed at least 1,297 people as authorities raced to bring doctors to the worst-hit areas before a major storm hits.

The 7.2 magnitude quake on Saturday destroyed thousands of homes and buildings in a Caribbean nation which is still clawing its way back from another major temblor 11 years ago and is reeling from the assassination of its president last month.

Southwestern Haiti bore the brunt of the blow, especially in the region in and around the town of Les Cayes. Haiti’s Civil Protection Agency said the toll from the disaster had climbed to 1,297 and the hospitals that were still functioning were struggling to cope as some 5,700 people were injured.

In the northwestern city of Jeremie, another badly hit area, doctors treated injured patients on hospital stretchers underneath trees and on mattresses by the side of the road, as healthcare centers have run out of space.

DML: Devastating!  I wonder if the Clintons will attempt to raise money for the country like they did last time.  Where did that money go, I wonder?

4 – Getting COVID relief to landlords, illegal immigrants will be top priorities of incoming NY governor
Fox News reports: Incoming New York governor Kathy Hochul on Sunday vowed to “fully cooperate” with requests for data on the nursing home scandal facing Andrew Cuomo’s administration – though she stressed other priorities included getting COVID relief money out to landlords and illegal immigrants.

“I’m not going to raise expectations that I have those documents in my hand on day one,” Hochul, the lieutenant governor set to replace Gov. Andrew Cuomo next week, said in an appearance on CBS’ “Face the Nation.” “What I have done already is met with the commissioner of health and we will be talking about what outstanding requests for data are in the realm. I will look at those and have my team focus on that early on.”

“I have to tell ya, on Day 1, I am focused on COVID,” Hochul, a Democrat, continued. “We have to deal with the fact that the rates are rising. I want to get money out to people. We have way too much money sitting there that should be going to renters, the landlords who are suffering. And I also want to get the money out for the excluded worker program where people who are immigrants aren’t getting any money because they aren’t documented and that money is sitting there unspent.”

DML: How about putting the priority on American citizens for once?  This is why I moved from NY to Florida. NY is a total sh*t show, and this lady will be just as radical as Cuomo but without the female touching routine — or so we hope.  These days, you never know who identifies as a man or woman.

5 – Biden Admin: Gender Identity More Valuable to Pandemic Response Than Economic Anxiety
The Free Beacon reports: The Biden administration has altered a document used to guide policymakers’ COVID-19 response to include questions about gender identity and energy consumption but jettison what it considers less useful inquiries, such as how the pandemic could affect future family income.

The Household Pulse Survey, which was intended to measure the impact of the coronavirus on families, has been updated to include questions about gender identity and sexual orientation. The Census Bureau asks respondents what sex they were “assigned” at birth, a phrase commonly used by transgender activists. The agency said the survey, which is distributed to one million households every two weeks, replaced questions about expected job loss and travel plans to make room for inquiries on gender identity, energy use, and summer education for children.

“The new version of the questionnaire … marks the first time a Census Bureau sponsored survey includes questions about sexual orientation and gender identity,” the agency said in a statement. “To reduce respondent burden, the Census Bureau removed questions whose utility had declined, including those about applying for Social Security benefits, plans for upcoming travel, and expected loss of employment income.”

Adam Korzeniewski, a Marine combat veteran and former Census Bureau employee, said that the move to use transgender talking points in surveys illustrates the agency’s increasing politicization and embrace of theories championed by transgender activists. Korzeniewski, who served in the agency during the Trump administration, said the focus on gender identity and sexual orientation makes the survey less effective as a policy tool.

“They are going to increasingly muddy the waters with these questions to where they’re going to ask increasing obscure liberal questions, and this is their attempt to remake American society through the bureaucratic process,” Korzeniewski said. “By including these questions, and by including what will eventually happen is giving multiple categories of hypothetical genders, is to actually muddy the waters.”

DML: Just can’t make this stuff up!  Today, I’ll eat entire pizza and then justify the calories by identifying as a skinny man. Do you think it will work?

MY PARTING WORDS: The only sane thing going on these days is DMLcbd.com