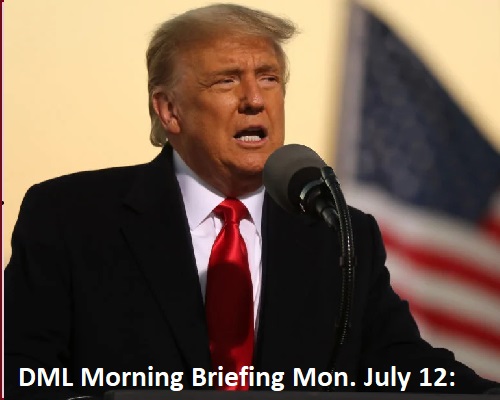 Today is July 12 and I am Dennis Michael Lynch. Below are my opinions on the stories grabbing headlines this morning. I hope you share this briefing as doing so will make you the smartest person in the room, in my opinion.

President Miguel Diaz-Canel, who also heads the Communist Party, addressed the country and blamed the U.S. for stoking the anger, according to the Washington Post.

“The order to fight has been given – into the street, revolutionaries!” he said in an address, according to the BBC.

Sen. Marco Rubio, whose family immigrated from Cuba, confirmed the report, tweeting, “The figurehead “President” of #Cuba tries to prove his toughness to Raul Castro by openly called for bloodshed. He says demands for #Libertad are a “provocation” & calls on Communists to violently confront protestors.”

“Protests in #Cuba aren’t simply about “shortages.” Socialism promises guaranteed food,medicine & income if you give up your freedom. When, as always, it fails to deliver you don’t get your freedom back. That’s why the protestors are chanting “Libertad”,” Rubio tweeted.

Sen. Ted Cruz, also the son of a Cuban immigrant, tweeted, “The Communist Cuban regime will be consigned to the dustbin of history. It has brutalized & denied freedom to generations of Cubans, and forced my family & so many others to flee. The American people stand squarely with the men & women of Cuba and their noble fight for liberty.”

DML: People who think they want socialism and communism in the USA better pay a visit to Cuba first.

“And now, it’s also because I got more votes, 75 million, than anybody in the history of the presidency, and far more than Clinton, far more than Obama, and a record 12 million more than 2016,” Trump said of what he has continued to describe as an effort to “rig” the election against him. “Think of it, in the history usually they go down a little bit second term and they win, but they go down a little bit.”

“Voting system companies have denied the various allegations made by President Trump and his counsel regarding the 2020 election,” the disclaimer read.

On Friday, law enforcement responded to a “suspicious occurrence” at the Maven Hotel, located less than a mile from Coors Field. After executing two search warrants, Richard Platt, 42, Gabriel Rodriguez, 48, Ricardo Rodriguez, 44, and Kanoelehua Serikawa, 43, were placed into custody, police wrote on Saturday. A total of 16 long guns, body armor, and more than 1,000 rounds of ammunition were recovered from the rooms, and officials speculated that a “Las Vegas-style shooting” plot was averted, multiple sources told the Denver Post.

One of the suspects, who was not identified by name, reportedly wrote on Facebook that he was going to “go out in a big way” following a recent divorce.

On Saturday, the Redbridge Central Library hosted a performance from the Mandinga Arts carnival group. Video footage shared on social media showed a rainbow coloured money running out of the library, with the mock genitalia flopping at motorists.

The event was part of a “Summer Reading Challenge” in partnership with the World Wildlife Fund (WWF) for a “very special nature-themed Challenge that will inspire you to stand up for the planet.”

Following widespread condemnation for hosting such lewd content at a children’s event, Redbridge Libraries said in a statement: “During an event put on at the library today there was a performance by a Carnival Arts Company. Unfortunately one of the animal costumes was inappropriate which we were not aware of at the time of booking.

“We deeply apologise for the offence caused. This is being investigated and a further statement will be made.”

DML: This is sick beyond words.

5 – Medical Journal: ‘Parents Should Lose Veto Power’ over Children Going Trans
Breitbart reports: Governments should exclude parents who oppose the hormonal and surgical transformation of their children, according to an article published in the establishment Journal of Medical Ethics.

When parents reject their childrens’ claim to be transgender, “parents should lose veto power over most transition-related pediatric care,” wrote author Maura Priest, a candidate professor at Arizona State University.

Trained medical scientists should defer to the childrens’ wishes once they decide that the children are “informed and competent” to make a lifetime decision over their medical health, sexual relations, and reproductive choices, Priest argues in the June 8 article:

If the medical community is to take LGBT testimony seriously (as they should) then it is no longer the job of physicians to do their own weighing of the costs and benefits of transition-related care. Assuming the patient is informed and competent, then only the [child] patient can make this assessment, because only the patient has access to the true weight of transition-related benefits.