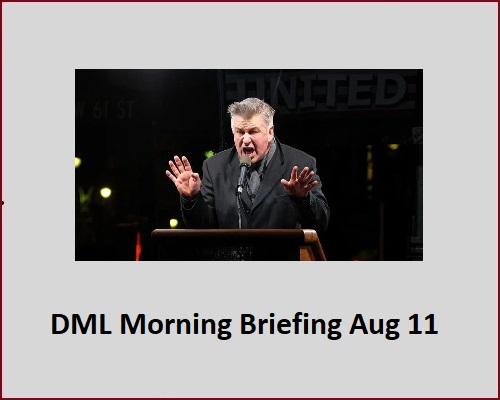 Today is August 11 and I am Dennis Michael Lynch. Below are my opinions on the stories grabbing headlines this morning. I hope you share this briefing as doing so will make you the smartest person in the room, in my opinion.

1.Democratic Rep. to retire, damaging Democratic hopes of controlling House in 2022
Fox News -Democratic Congressman Ron Kind will not seek re-election after 25 years in the House, dealing a significant blow to Democrats’ chances of maintaining control in 2022.

Kind, who represents Wisconsin’s 3rd congressional district, will retire at the end of his term according to top Democratic lawmakers, including House Speaker Nancy Pelosi who addressed the reports of his retirement in a statement wishing him “all the best.” The 3rd is a swing district.

Democratic Rep. Sean Patrick Maloney, chairman of the Democratic Congressional Campaign Committee, reportedly warned members of his party last week behind closed doors that Democrats, who currently hold a 220-212 majority, would lose control of the House if the midterm elections were held right now.

DML: No American with a brain would vote for the Democrats in 2022, and so this is why they continue to push the pandemic scare tactics.  The Dems need those mail-in ballots and social distancing rules to ensure they can cheat to win.  What are the Republicans doing to protect themselves, and us, from another cheat fest?

Lawmakers approved Democrats’ budget resolution on a party-line 50-49 vote, a crucial step for a president and party set on training the government’s fiscal might on assisting families, creating jobs and fighting climate change. Higher taxes on the wealthy and corporations would pay for much of it. Passage came despite an avalanche of Republican amendments intended to make their rivals pay a price in next year’s elections for control of Congress.

House leaders announced their chamber will return from summer recess in two weeks to vote on the fiscal blueprint, which contemplates disbursing the $3.5 trillion over the next decade. Final congressional approval, which seems certain, would protect a subsequent bill actually enacting the outline’s detailed spending and tax changes from a Republican filibuster in the 50-50 Senate, delays that would otherwise kill it.

DML: The most costly bill in the history of the world.

According to an internal memo obtained by CNN, Southwest CEO Gary Kelly reaffirmed the company’s stance that it will “strongly encourage” employees to get vaccinated without mandating it.

Last week, United Airlines mandated employees be injected with the coronavirus vaccine by October 25 or face termination, by far the strictest corporate mandate in the United States. United CEO Scott Kirby and President Brett Hart said last Friday: “We know some of you will disagree with this decision to require the vaccine for all United employees. But, we have no greater responsibility to you and your colleagues than to ensure your safety when you’re at work, and the facts are crystal clear: everyone is safer when everyone is vaccinated.”

Prior to the United Airlines’ mandate, Frontier Airlines told current employees to get the vaccine or else be subjected to regular COVID tests; the vaccine was only mandated for new and future employees.

DML: Do not give your air travel business to United or Frontier.  Make them pay for being unconstitutional.

Robin’s bisexual narrative unfolds in what one fan calls a “lightbulb moment” as he and Bernard find themselves in a streetside brawl. After the hero ultimately rescues Bernard, Robin later pays him a visit at his apartment.

As Drake, the character can be seen psyching himself up for greeting Bernard: “It’s OK, Tim. You got this.”

Just as Bernard opens the door to ask Tim on a date, Tim abruptly says, “I’m really glad you got home okay. I was relieved. And I’ve been doing a lot of thinking, about that night. And I — I don’t know what it meant to me. Not yet. But I’d like to figure it out.”

“I was hoping you would. Tim Drake … do you want to go on a date with me?” Bernard asks.

The issue ends as Robin says yes, leaving the reader on a cliffhanger until the next installment. Members of the LGBTQ community celebrated the reveal on social media.

5.Alec Baldwin calls Cuomo’s resignation a “tragic day”
NY POST – Gov. Andrew Cuomo may not have many allies left in New York politics, but he’s got a friend in Hollywood.

Alec Baldwin tweeted his support for Cuomo, 63, just hours after he announced that he was resigning as governor of New York in 14 days.

The actor, also 63, wrote, “Regardless of what you think of Cuomo, this is a tragic day. Party politics in this country draw ambitious but ultimately isolated, even socially maladjusted men and women who, given the current cancel culture, will likely have their shortcomings exposed and magnified.”

DML: I guess womanizers stick together! I’d post Baldwin’s tweet for you, but I was blocked from his page two years ago after reminding him about the phone message he left for his daughter.  In the event you’ve never heard it, here is the soundbite: